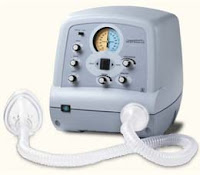 I am feeling so much better that I am beginning to wonder what all all the fuss was about. My temperature is down to normal and the infection seems to have gone. There is some residual gunk and coughing but it is as nothing compared to last week. It will take another week or so before I'm back to what passes as normal for me but I can live with that.

I would certainly have ended up on a respiratory ward at St Helier or the Brompton Hospital had it not been for one particular piece of kit. At times of crisis our home can resemble a reasonably equipped emergency facility what a BiPap ventilator, a nebuliser, ceiling hoists, profiling bed, air mattress, Oxygen, a drugs cabinet with a significant street value, and a blue box the size of a large bread-bin, known in our home as 'the cough machine', but more technically, by my consultant at least, as a Cough Assist Mechanical Insufflator-Exsufflator.

The Cough Assist Mechanical Insufflator-Exsufflator is a genuinely life saving bit of tech. Without it I would either be dead or on permanent ventilation. The machine works by clearing secretions by gradually applying a positive pressure to the airways and then rapidly switching to negative pressure. Apparently the rapid shift in pressure produces a high expiratory flow, simulating a natural cough. The reality is more akin to having someone Dyson your lungs on full power. The effect is unsettling and uncomfortable but infinitely preferable to hours of ineffectual hacking coughs that simply exhaust you, or, sessions of chest pounding physiotherapy that induce near psychopathic hatred of the person pummelling you.

Way back in 2000 I was very ill with Pneumonia resulting as a complication from Pancreatitis. I was in intensive care and high dependency wards for months and for most of the time had a tracheotomy. A tracheotomy, for those unfamiliar with the procedure, is where someone, preferably a doctor, makes a hole in your neck and feeds a tube into your lungs for air to be drawn through, or, as in my case, for someone to stick a suction tube in and vacuum your lungs for gunk. Having a nervous F2 wielding a scalpel at your throat while you are passing out from lack of Oxygen rates pretty low on my list of things to do again. The advantage of the cough machine is that it is totally non-invasive. It removes secretions without the need for someone sticking a plastic straw through an unnatural orifice in your neck. I'm not sure how much such machines cost but they must be cheaper than spending days, weeks or months in hospital.

Even today, when I am feeling so much better, I have already used the blue machine twice. Once again I am grateful to be living in a country with a national health service that provides such equipment free at the point of need.

In the light of all above, it might seem churlish to moan about another freely provided piece of absolutely necessary kit, but this morning, just at a critical juncture in the preparation for a shower, my new multi-thousand pound, state-of-the-art, rinky-dink wheelchair stopped working. The control panel LCD screen simply states there is a system error and the thing refuses to budge. Fortunately, the ever unreliable Serco, have failed to collect my old wheelchair and so I am back in that until an engineer with a degree in computer science can get here tomorrow. I have had the new chair ten days, most of those I've been too ill to do anything other than sit, so I doubt the problem is overuse. Mind you, I wouldn't put it past Matty to have reprogrammed it to play Marvel Ultimate Alliance 2.