Escape To The North Pole

Yesterday, Polly and I picked the boys up from school and we all headed to the North Pole. The North Pole had temporarily relocated to a garden centre a few miles away, although Sam maintained with absolute certainty that it was usually located west of Africa. Matty was less than enthusiastic about the adventure, maintaining that both the North Pole and garden centres were boring.

Matty's attitude changed markedly when he saw that we were following signs to Santa's Grotto. At 8, Matty is beginning to harbour uncertainty about the whole Father Christmas mythology, but faced with the prospect of a face to face encounter decided to hedge his bets and repent his doubts and embrace the fable. An elf at a cash register welcomed us and invited the children to meet Santa. As we entered the grotto a sign read '2 hours queuing time from this point' and a winding path led off to the left. Fortunately our quick escape from school meant we were ahead of the crowds and the grotto was, for the most part empty. We wound our way along the path, pausing to admire animatronic elves preparing for Christmas, making and wrapping presents with mechanical efficiency while others played seasonal musak and loaded a sleigh. All good fun but I confess to being relieved we weren't enjoying them for 2 hours. 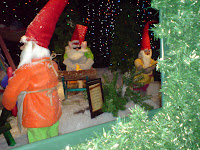 Eventually we reached a sign declaring '10 minutes queuing time from here` and joined the line of excited children. Every few minutes an elf, slightly self conscious in his green elven attire, would open a door and beckon the next group into Santa's living room. Some long 10 minutes later it was our turn. 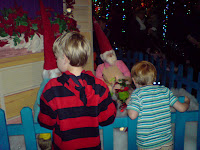 A suitably convincing Father Christmas, resplendently bearded, greeted the boys and determined if they'd been naughty or good. Assured of their saintliness he enquired after their
preferences regarding presents but was thankfully vague about the likelihood of them receiving anything specific. He posed with the boys for a couple of photographs and finally, prompted by the elf, doled out presents, before the busy elf ushered us out from the North Pole and back into the garden centre. 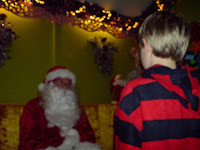 After a much needed cup of coffee, during which the boys unwrapped their gifts and discovered that they both had age appropriate construction sets, we followed signs to Santa's Reindeer. The reindeer were in a high security enclosure, having last year made a bid for freedom, escaping to be found grazing on a round-about a mile or so away on Christmas day. This lot were going nowhere. I was surprised not to see gun turrets. After a few minutes of watching them eat carrots and forge identity documents we headed for home, humming the theme tune to The Great Escape. 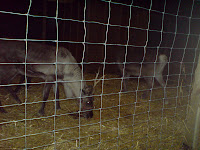