At one time Heritage USA was the third most visited attraction in the States, after Disneyland and Walt Disney World. That was in 1986, now, less than 10 years later, it was fighting a losing battle against becoming a wilderness. 2,300 acres of anti-climax. To give you an idea of the size, you could fit the original Disneyland, UK's Blackpool Pleasure Beach, Six Flags Great America, and Universal Studio's Florida all inside the grounds together, and still have room for a few Wembley stadiums (stadia?) left over.

At myinsistence we had travelled to Fort Mills in South Carolina to visit televangelist Jim Bakker's Christian theme park. I had seen a documentary about it sometime earlier and, admittedly with an eye on satire, was keen to see the place. It had boasted a 501-room Grand Hotel, Main Street Shoppes (sic), the Heritage Village Church, a 400-unit campground, an amphitheater, conference facilities, prayer and counseling services, full TV production studios, Bible and evangelism school, visitor retreat housing, staff and volunteer housing, and the vast Heritage Island Water Park and recreational facilities including tennis, fishing and a petting zoo. At one time the Passion was enacted daily and you could visit the Upper Room. 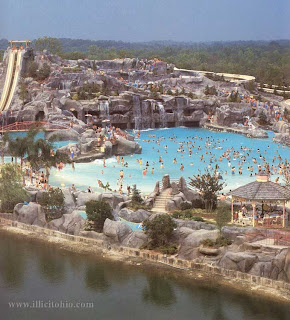 ater park, which had once been the centre piece of the whole place was now derelict, a mass of pastel coloured concrete. The huge Typhoon water slide, down which it was possible to reach speeds of up to 40 mph, was clearly visible. We found a swimming pool nearby that was still functional and the party I was with had a swim. I was anxious to look around.

We found our way to an indoor shopping street that was lit as if it were a star-lit night. It had the best Christian tat for sale I've ever seen. You could insert pictures of your children meeting a suspiciously European looking Jesus in to an oil painting. There were King James Bibles for your Gameboy and enough Olive wood crosses to build an ark. The fast food restaurant sold Goliath burgers and Moses milkshakes. Fantastic.

I won't go in to the history of Heritage USA, you can find the

details on the web easily enough. It is enough to say that its demise was wrapped up in some dubious financial dealing, a sex scandal, and some bitter infighting between various high profile televangelists. All very sad and distinctly 'unchristian'. At the heart of it all was Jimmy and Tammy Faye Bakker's PTL organisation.

So why was I so interested in Heritage USA? Why, aside from a chance to feel pompously superior and to gape at fallen extravagance, had I dragged our party to this now rather sad place? Two words. Kevin's House.

Kevin was a severely disabled teenager who had been adopted by some relative of the Bakker's. Jim and Tammy Faye raised millions of dollars to have a house built for him. No 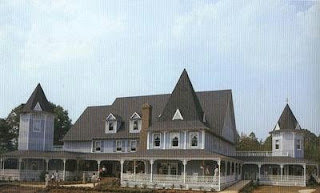 w, the facts are murky and hard to come by even with the internet at my finger tips, but I seem to remember that there was some question as to where all the money went. (Surprised?) But most amazing to me was the rumour that the house had been built all right, but that there was very limited disabled access. I had heard that poor Kevin had to be manhandled up the stairs to his room. I wanted the truth. Kevin, who died a little while after the house was built was regularly wheeled out to ask for money on the PTL television show, uttering the immortal words “they wouldn't ask unless they needed it.”

Well, the house was there. I saw it with my own eyes. But I couldn't gain access. It was closed to the gawping public. I will probably never know now. The house burned down in 2002. Arson was suspected. So, if you know the truth please let me know. Was the house wheelchair friendly? Was it all a fund raising con?

Heritage USA has been broken up into smaller concerns today, I'm told. Tammy Faye died last year and I can't be bothered to find out about Jim Bakker.

Next time – The last plane out of Georgia.
Posted by Unknown at 10:51