Wales 09 or Don't Hold Your Breath

When going on holiday what is the last thing you want to forget? Sun cream? Swimming costume? Wheelchair battery charger? Ah yes, another Deal holiday gets under way with its customary smoothness.

Fortunately the Paul Sartori Foundation who had the misfortune to be responsible for my homecare while we were in Wales are a superb group of people and managed to wangle a suitable charger from the very nice man who had undertaken to mend the electric bed and overhaul the hoist. Sophie at Paul Sartori must have wondered what terrible thing she had done in a previous life to have merited such severe punishment as having to organise the seemingly endless and complex list of requests phoned and emailed to her from London. The result, however, was a model of homecare provision with a succession of nurses arriving to sort me out morning and evening with good humour and skill. Their team was supplemented by 'No Problem' Greg who drove vast distances morning and night every single day to form the lynch-pin of my holiday care, and met every task asked of him with a cheerful “not a problem”.

The holiday passed with a mix of Welsh sunshine and showers but left us plenty of opportunities to enjoy the lovely local beach. The Pembrokeshire countryside is wonderful and we got to explore some places we had never been before. The boys particularly enjoyed the freedom afforded by a very safe environment and would disappear to play, armed with wooden swords, for hours on end with Alex from next door and other holidaying children. Ten days was not long enough so next year, Paul Sartori Foundation willing, we may try for longer.

A highlight of the holiday was our day spent at the Pembrokeshire County Show. This vast three day event takes over a local air-field and despite my wife's disparaging attitude of “why am I going to look at tractors?” turned out to be great fun. There were horse jumping competitions, dog agility trials and a truly breathtaking motorcycle display team who shot up ramps with such gravity defying acrobatic death-wish like grace bo 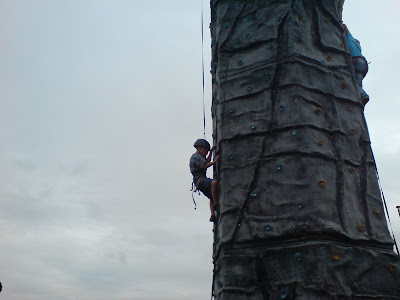 th Polly and I wondered if their mothers knew what their sons did for a living. As one young man leapt some fifty feet in the air and casually let go of his bike, we both turned to our open-mouthed boys and said simultaneously “No!“ There were lots of rides and bouncy things for the boys to go on, including an army operated climbing wall which both of them gleefully scrambled up. As Sam abseiled down he banged his head on the tower and a whole platoon of battle hardened soldiers went “Ouch!“ (Sam was fine, his main concern was making sure we had all seen he had climbed as high as Matty.)

Of course, it wouldn't be a proper Deal holiday if all had gone smoothly. About a week into our stay the alarm on my BiPap ventilator began to go off with increasing regularity each night. Now the display on the BiPap is something akin to the tactical array on the USS Enterprise and it tells you such useful things as pressure, duration of breath, number of breaths per minute and whether your Phaser is set to stun. You can also turn off the alarm – for two minutes, after which, unless the problem is sorted, the piercing alarm goes off again. . and again. The display told us that there was a leak in the system but if there was we couldn't find it. The alarm began to go off at about 11 o'clock every so often, but by about 3 o'clock it was going off continually. Polly would get up to disarm it time and again but it always went off as soon as she crawled sleep deprived back to bed. It got so bad that Paul Sartori arranged for a night-nurse to stay over for the last night because they were concerned about Polly being safe to drive back to London. The nurse spent the night frantically stabbing at the alarm off button while I was dragged in and out of sleep. I was seriously thinking of taking the wretched machine down to the beach and throwing into a rock-pool. We rang the Brompton hospital but getting an engineer into the wilderness of west Wales is no easy matter especially when mobile phone reception is as variable and unreliable as a Libyan terrorists conviction. In the end we decided to leave it until we got home.

We stopped in Bristol to see my mum on the way home and didn't get back to Carshalton until gone 9 o'clock. That night Polly slept with the BiPap virtually tucked under her arm. Throughout the night the alarm went off time and again. The next day an emergency engineer drove a hundred miles to come and fix it. After prodding and poking it he checked the record detailing the machines history. “There must be some mistake,“ he told Polly. “It says here the alarm went off 582 times last night. That can't be right.“ Polly just laughed hysterically. Further prodding and poking revealed there was nothing wrong with the bloody thing. Which means the problem is not with the machine but with me. Sigh.

As far as I can gather in my sleep befuddled state the problem occurs when I am in deep sleep. Apparently my facial muscles must be relaxing and allowing the pressurised air to escape through my mouth. The BiPap thinks there is a leak and alerts us to the fact. The engineer has given us a different machine that does not have an alarm but unfortunately it is not as powerful as the old one so is only a temporary solution.

I sense that a trip to the Royal Brompton Hospital is on the cards.
Posted by Unknown at 12:04